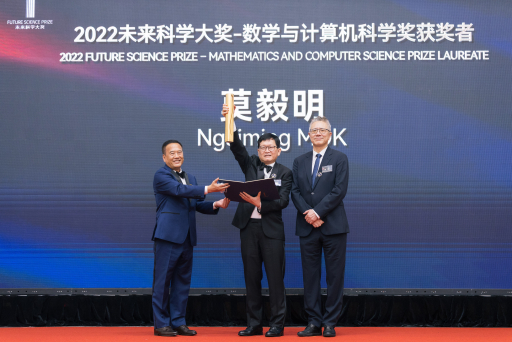 An award ceremony, co-hosted by the Future Science Forum, the University of Hong Kong (HKU) and Southern University of Science and Technology, was held today (November 27) in Beijing, Hong Kong and Shenzhen simultaneously. Future Prize Laureates, world-distinguished scientists including members of the Science Committee of the Future Science Prize, leading entrepreneurs, academics and students gathered together to witness this memorable event.

The Hong Kong ceremony was held on the HKU campus at Loke Yew Hall. Top-notch scholar Professor Ngaiming Mok, Edmund and Peggy Tse Professor in Mathematics and Chair of Mathematics at HKU, received the prize in Mathematics and Computer Science for developing the theory of Varieties of Minimal Rational Tangents in algebraic geometry to solve several long-standing problems and proving Ax-Schanuel’s conjecture for Shimura varieties.

Professor Harry Heung Yeung Shum, Rotating Chair, Council of the Future Forum 2022, addressed the audience at the ceremony in Shenzhen, said: “Of the scientists honoured in the Future Awards today, their distinguished achievements and the important breakthrough they made in scientific research are of the highest level representing the top scientific research and technologies in the contemporary world. They have not only benefitted the country’s scientific development and the wellbeing of society, but have also provided insights and solutions to address the great challenges faced by mankind in the course of development. This is indeed a big contribution to the whole world.”

Mr David Feng Yu, Rotating Chair of the 2022 Future Science Prize Donor’s Congress, congratulated and praised the three award winning scientists. He said: “Excelling in their own field, they share the same spirit of science, i.e. exploring the secrets of nature and stretching their own limits, and working relentlessly for the betterment of human civilisation.

Professor Xiang Zhang, President and Vice-Chancellor of HKU, congratulated the awardees and was delighted to see another distinguished HKU scholar being honoured with the Award. He said scientific spirit is not only about inspiration and discovery, but also about succession. He said the award today is to honour 'an era' and 'future generations over thousands of years' of scientific development.

Professor Wang Xiaodong, member of the Science Committee member of the Future Science Prize, referred to Science as the torch which guides the advancement of mankind, and thanked the distinguished scientists for their spirit of exploration and perseverance in scientific research.

About Future Science PrizeEstablished in 2016 by a group of scientists and entrepreneurs, the Future Science Prize is to reward scientists who have made outstanding research achievements in our society, enlightening the spirit of science and promoting the development of innovative science among the next generation across China and the world. The Prize consists of three categories: Life Science, Physical Science and Mathematics and Computer Science. The award is nominated by invitation only and professionally evaluated by the Scientific Committee composed of outstanding scientists, upholding the principles of fairness, impartiality and trust. The recipients of the three categories will be honoured and granted US$ one million each to support the continuous development of their research. For more information, please visit: http://www.futureprize.org/cn/index.html

About Professor Ngaiming MokProfessor Mok was a graduate of St. Paul's Co-educational College in 1975. He obtained his PhD at Stanford University in 1980 and embarked on his teaching and research career at Princeton University. Subsequently, he was Professor at Columbia University and University of Paris, before returning to Hong Kong in 1994 to take up a Chaired Professorship in the Department of Mathematics at HKU.

Professor Mok is recognised worldwide for his research achievements. The prestigious awards he received include the Sloan Fellowship Award (US), Presidential Young Investigator Award (US), Croucher Award 1998 (Hong Kong), State Natural Science Award (Class II) 2007 (China), the Bergman Prize of the American Mathematical Society 2009, and the Chern Prize of the ICCM 2022. Professor Mok served on the Editorial Board of Inventiones Mathematicae from 2002 to 2014. He served as a member of the Fields Medal Committee for the world's prestigious International Congress of Mathematicians (ICM) in 2010, and was a core member for the subject panels of Algebraic and Complex Geometry in ICM 2006, and in Analysis and its Applications in ICM 2014. As Director of the Institute of Mathematical Research at HKU, Professor Mok also strives to provide a platform where researchers in Mathematics can freely exchange their research ideas, and create an ambiance that facilitates cross-fertilisation between different fields of Mathematics. He was elected a Member of the Chinese Academy of Sciences (Mathematics and Physics) in 2015, and later a Member of the Hong Kong Academy of Sciences in 2017.